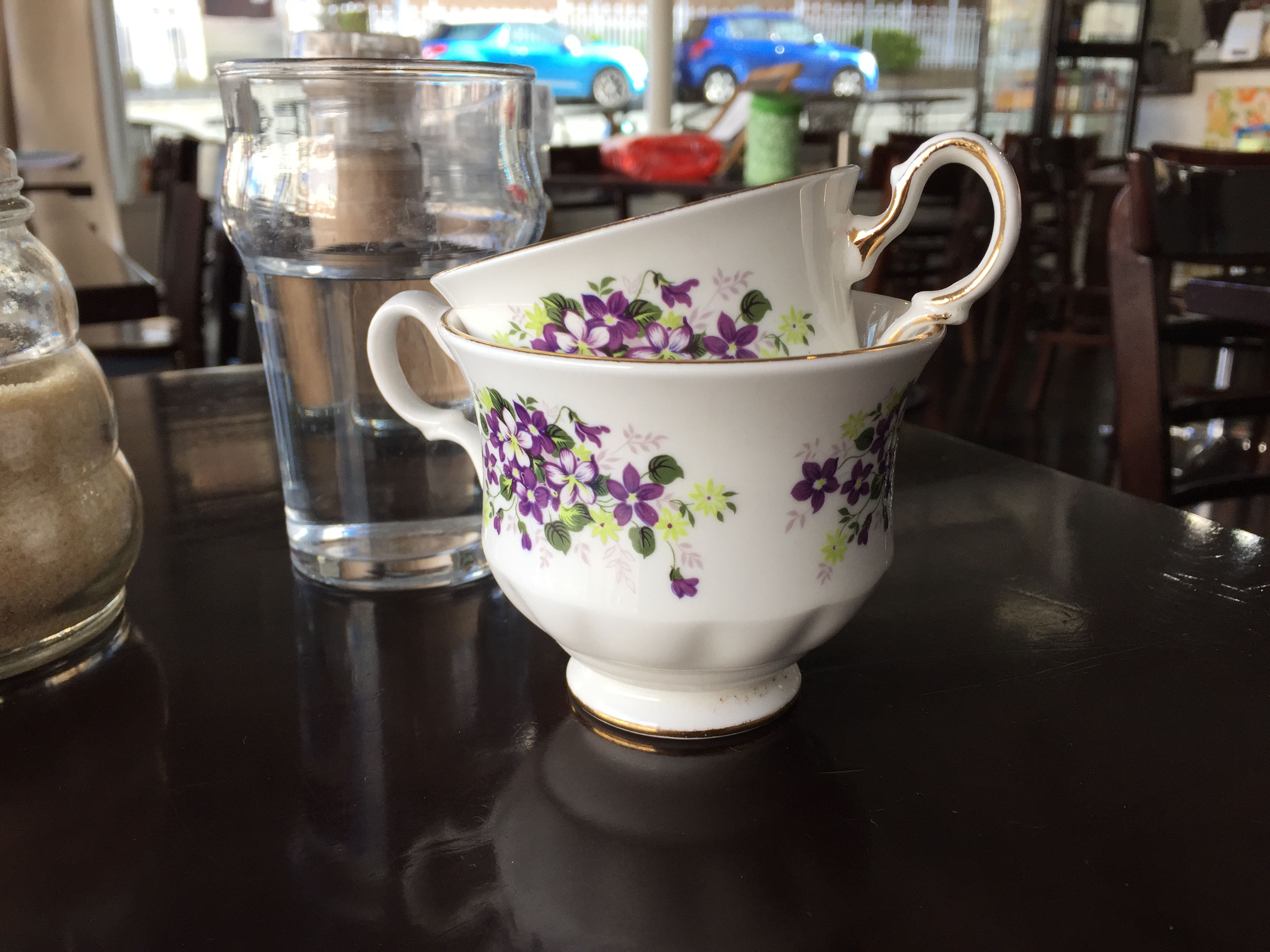 It was a Queen Anne.
A small tea cup with delicate violets painted on the bone china, with a gold rim on the handle and lip.
It was part of her wedding set. With saucers, bread and butter plates, a teapot, sugar owl and cream jug. There were two sizes of tea cups. The smaller delicate ones for the ladies, the larger size, with larger handles for the gentlemen.
She only ever used it on the best occasions. The very special ones.
A gentle English Breakfast or a subtle Earl Grey, served with her light scones, homemade raspberry jam or her special citron tart, considered quite outlandish at the time. She felt bold and reckless when she first served it now it’s a standard in her repertoire.
The day of the flood, the entire sideboard got washed from one side of the hose to the other and when they came back to look at the damage she found the teapot broken, along with three of the cups and the sugar bowl.
The furniture was ruined, the house stank of that horrid wet manky mud. Everything she’d ever owned including the love letters from her parents had been washed away or destroyed, and despite the remnants of the set that did remain, it was those fragments that she cried over most.
The memories of that wedding day. Her family, the excitement. The years of promise that were before her.
Her husband thought she was being silly and reminded how lucky they were. She knew that, though it didn’t stop the tears at the time, so she brought them out of the sideboard and those memories faded as the special set became the everyday one.
Over the years friends, children, grandchildren and great grandchildren had drunk from those cups.
Confidences, consolations, congratulations.
Those cups hold those memories.
But there’s only two left, and when she passed they were collected with the bits and pieces in the cupboards and crated off to the antique shop.
There they sat in a tiny corner, unnoticed by many until the old antique store had closed and the café next door was given three bags of tea cups and assorted saucers.
$2 each.
The early morning quiet gave them time to have a rummage to see if they could use any, a couple of regular customers took a small interest and looked on as the cups were taken out and matched up with saucers.
Except two Queen Anne cups with delicate violets painted on the bone china.
Two tea cups, one in a regular size and one smaller.
No saucers though and so no interest from the café owners.
The older lady in the corner saw them, the flowers reminding her of a good friend long gone, she asked and bought them; wrapping the two in her scarf and braving the chill wind without it.
They now stand, pride of place, on her kitchen sideboard, to be used when her granddaughter comes over.
Painted by fairies she tells her.
One full with tea, the other with milk.
Two cups, the perfect size.