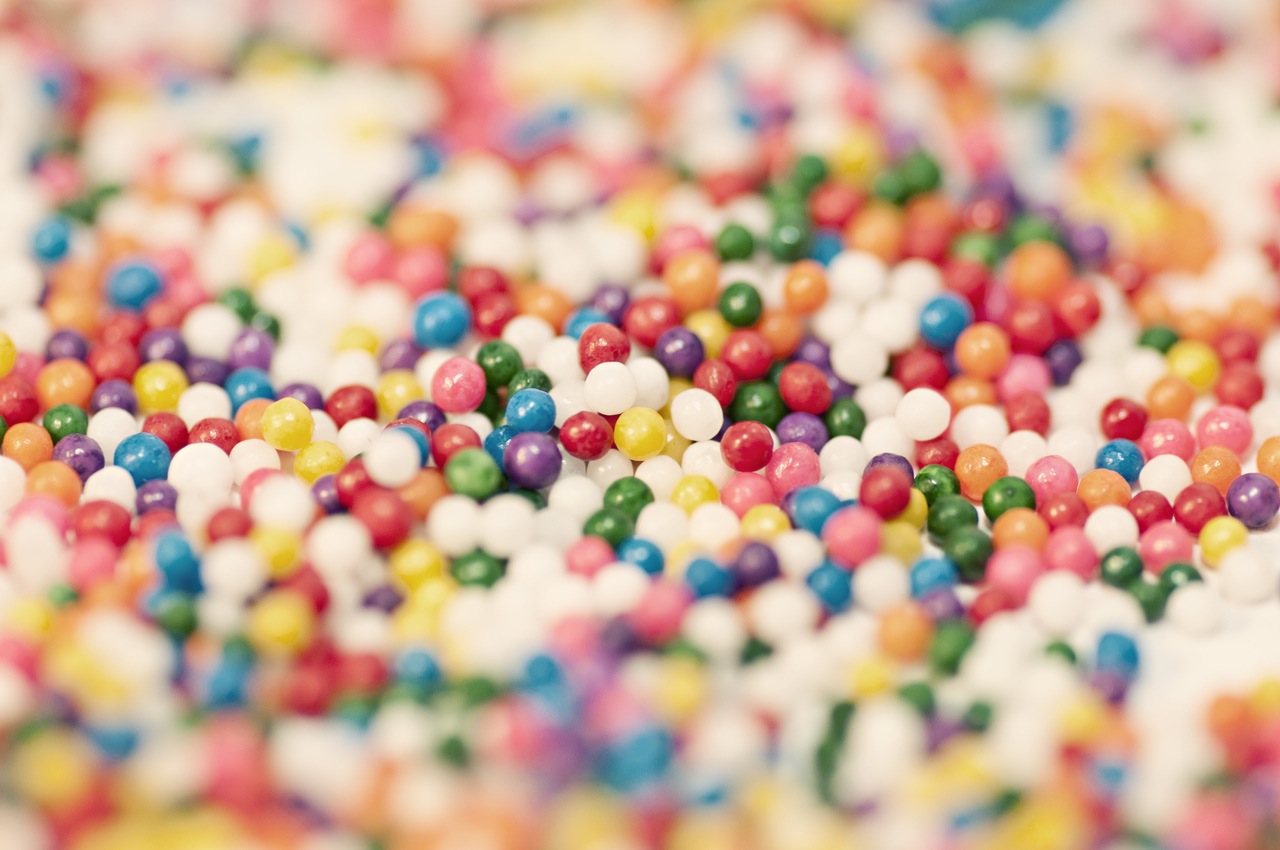 Sugar!
It dances on the air and sweetens the mood.
Every one smiles and you know that nothing bad could happen here. The walls are painted in rainbow coloured offerings and she clutches tightly a small gold coin that will offer up some of those treasures behind the counter.
There are so many choices that she is almost giddy with the seriousness of what is about to happen. This is the first time, the first time that she is here on her own to make those choices. She tries to take it all in, widening her eyes as far as they go, so she’ll miss nothing.
The happy man behind the counter is wearing her favourite apron today.
The green and blue one.
He knows that today is a very special day, the day she chooses herself.
It means that she is finally a big girl, because she hasn’t needed pull-up nappies for a week.
Her Mum calls them pants, but her brother calls them nappies and he’s right.
Her brother said he got to start choosing when he was a baby, much younger than her. But that’s ok, ’cause Mum said she was different and it would take different times.
She did it faster than him though. And that’s the best, ’cause she’ll be able to use that next time they fight. He might have done it earlier, but he still wets the bed. Not every night, just enough so that he hasn’t been able to choose for a while, even if he was first.
She can see Mum outside the shop talking to some of her friends, and waves when she sees her looking.
She slowly walks up to the counter, stands up on tiptoes, and puts the now grimy and slightly sweaty coin on the counter.
The happy man gets his special pink lolly tongs ready for her. ‘What do you want sweetheart? You just let me know and I’ll tell you when you’ve run out ok?’
She screws up her forehead. She knows what she wants and with two hands on the glass counter she pulls herself up so she can see everything near the register.
‘I want,’ she starts.
‘Yes?’ He encourages.
‘I want for you to put it in the doggy box for the people who can’t see.’
Watching him carefully as he picks up the coin, he asks, hand hovering over the little Labrador statue, ‘are you sure?’
She nods.
‘At Grandma’s they have one who helps them lots and Grandma says that they might not have him for longer cause he’s ‘spensive. He makes them happy like lollies make me happy so …’
The happy man, pauses, just a little, then puts the coin into the dog statue and then hands her an extra-long sugar python.
‘But I can’t have the snake, cause I want the puppy.’ Big eyes, she doesn’t understand. She thought about this for a very long time, the whole way here.
The happy man bent down and put out his hand out for her to shake. ‘You, little lady, are going to go places. I’m giving you the python for free. It’s a pleasure doing business with you.’
She grips the snake and turns to go outside.
‘Sweetie?’ Her mum asks ‘what did you get?’
‘I got a snake cause I’m going places’ she said.
Her mum and her friend laughed. ‘Kids’ they say and keep talking.
Sucking the end of the python she looks back inside the lolly shop to see the happy man rub his eyes, pull out his wallet and put a gold note in the doggy statue.
She’ll tell Grandma that they can keep the puppy dog when they visit tomorrow.