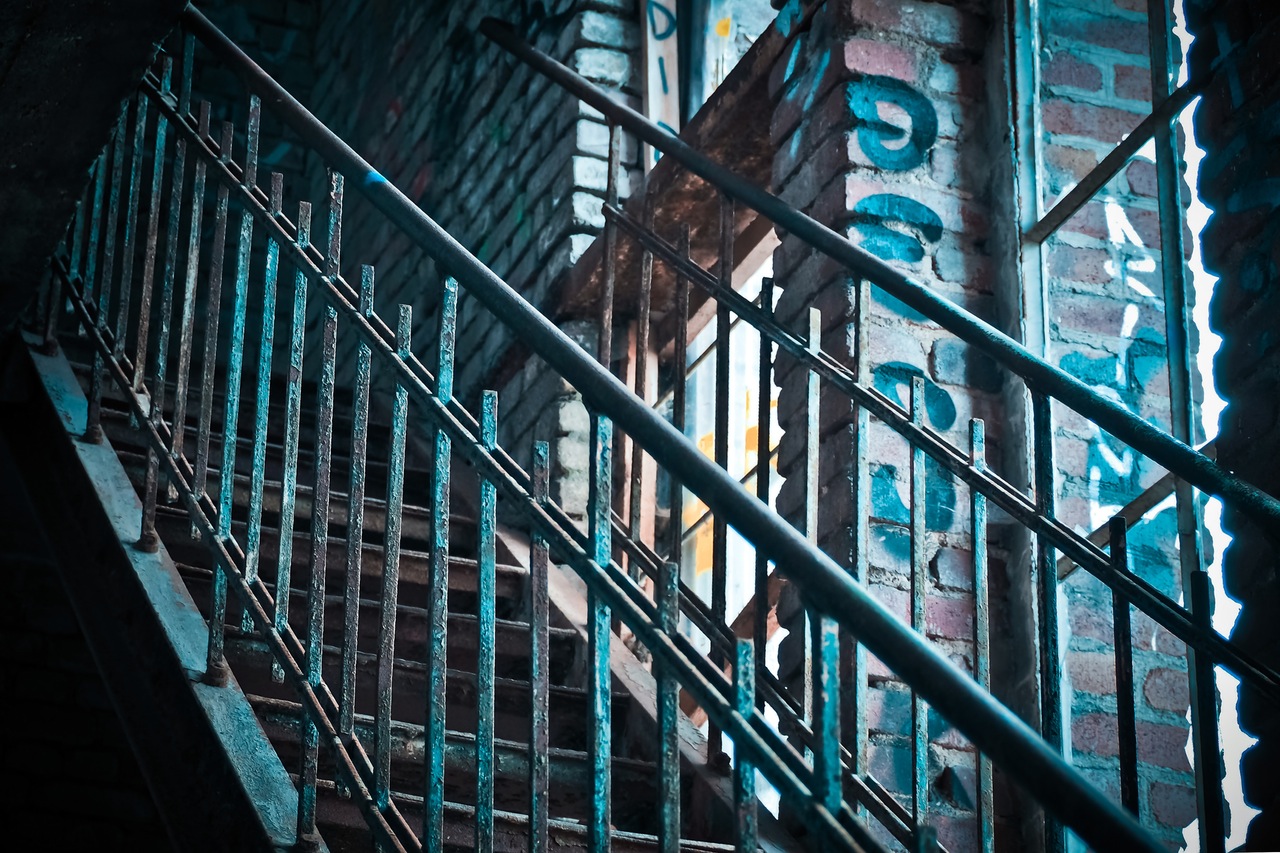 Every time he climbs the stairs, she sees that he looks in.
Is it a reflex?
Is it curiosity?
Is it a little more sinister?
The stairs run along her loungeroom windows, so many people walking up to the top flats do peep in, then realise what they’re doing and look away quickly.
Embarrassed.
She used to freeze every time someone went past, then decided that it was silly and that she had to snap out of it.
Unearthed some old lace curtains her mother sent down. Balancing precariously on the back of her sofa she managed to attach them to the rungs.
It wasn’t as sunny or as light in the lounge now, but there was a small level of privacy.
He still looks in though.
Sometimes he lingers on the stairs, as though trying to see what is happening. When he’s working outside in the common courtyard, which he has filled with pots of garden veggies and herbs, he whistles tunelessly, as if to let her know, to let others know, that he is there, that he’s working not loitering.
It feels like he’s loitering though.
Once, when she had a bath, the window fogged up entirely, except for a tiny slit right up the top. It was a heavenly bath and utterly enjoyable until she was surprised by a flash.
A camera flash?
She doesn’t know.
By the time she git out, threw on a robe and ran around, there was no one in sight, and no one had seen anything when she questioned her fellow courtyarders.
Sometimes she felt as though she was paranoid and then something would happen, definitively, and she knew it wasn’t just her.
Like the time her underpants had made it off the washing line and were left folded on her doorstep. No-one knew about that either.
On a few occasions someone delivered her mail right under the door, not in the locked mailbox that belonged to her at the Apartment complex’s entrance. And every Valentine’s Day there would be a single red rose left on her doorstep.
It could be completely separate, she chided herself, using the blinds at night and scurrying from the carpark to her door each day after work. When neighbours asked how she was, she carefully considered each item of news she gave them, then wondered if she had given anything of her private life away.
She started to feel trapped in her home. But scared to be away too long because from time to time when she came home, something wasn’t right.
Something had been moved.
Something she could have sworn was one place, was now somewhere else.
Then the phone calls started.
Once a day
Twice a day.
Sometimes in the early hours of Saturday or Sunday morning. A private number she couldn’t block. And there was never any sound on the other end. Not even breathing.
It was creepy.
She started pulling her blinds down the minute she got home.
She deliberately changed routines, changed hair, changed cars.
Parked outside, not inside, two blocks away so no one would know her car.
Stoped talking to the neighbours, and withdrew.
Every time she tried to speak of it, it came out garbled. Nothing certain, just feelings and suspicions.
Her cat was ill, and when she took it to the vet they said it had been poisoned. She never let it outside again and the vet’s proclamation sent a chill up her spine.
She started looking for places elsewhere, anywhere, and then finally a chance and she moved in the dead of the night, quietly, without leaving a forwarding address.
It’s become a way of life now.
She dreads Valentine’s Day: As soon as a single red rose lies on the doorstep, she knows that it’s time to move on, again.