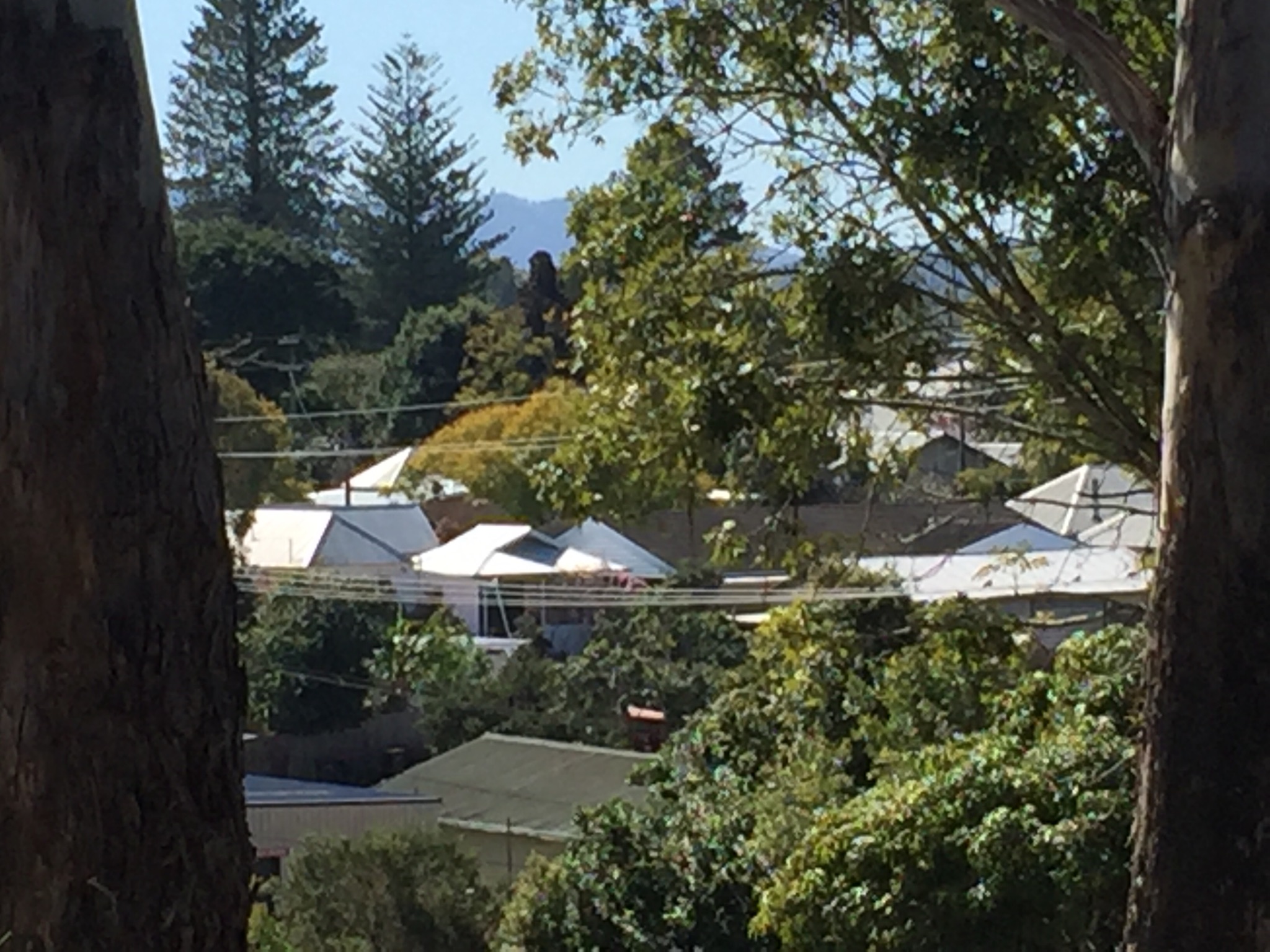 Rooftops. That was the best part of this job.
He could spend his entire lunch break just gazing out across the roofs. Occasionally he see Miss Maison from the Gelateria up on her balcony. Hanging out the washing.
You’d always see the delivery trucks backing carefully up the alley behind the shops. It was quite interesting the day The Cake Hole got solar panels, people scurrying here and there, the usually quiet space teeming with life like the day he found a dead flying fox on the ant nest in the park.
There was also the afternoon the vet next door had a rogue kangaroo in the yard causing all sorts of trouble, but usually, like today, it was quiet.
Serene. A moment of lunchtime Zen.
The rows of shops extending all the way down the main road until the park. Red tiles.
Grey tiles.
Tin.
Slate.
Brick.
All had similar frontages but what many people didn’t know, that’s where the uniformity ended. There were extensions and balconies, follies and ruins.
The Art Gallery with its collection of dead plants by the door – a new installation? The beehive over by the old Emporium.
The Emporium, now there was a majestic rooftop. A grand old lady of timber and tin with four proud brick chimney stacks.
The beehive was kept at the back where two points of the roof bowed to each other, on a small patio with glass French doors.
Once there had been metal table and chairs, flowers and laughter, now there was just the beehive.
His gaze travelled over it then back again not realising what he was seeing. As soon as his synapses fired into cognitive thought patterns and made the connection of what he was seeing to knowing what it was that he was seeing, he choked on his drink. Spraying ice coffee through his nose across the table, coating the window in a cream coloured film.
He wiped ineffectively with his hand as the liquid pooled on the window sill and he peered out with more intensity.
There was someone there.
Someone with long hair and a nubile figure.
A very naked, and nubile figure.
It turned.
Make that a very male and nubile figure.
He stared, open mouthed, as the man, young man? Hand cupped in front in that familiar way, tried the windows and then the doors, all which it seemed were locked. Slowly and gingerly the man peered around a chimney and over the eaves to the balcony below.
Like a pale spider he lowered himself one balcony at a time before finding purchase on the alley and fleeing towards the river.
Curious.
He knew everyone in town, but that body, face, shade of hair colour were unfamiliar. Also, the only thing at the top of the old Emporium building was Marion’s flat, the Anglican rector; and she wouldn’t be back in town for another week.
He finished his sandwich, folding the paper carefully and placing it in the bin. He wiped up the spilt, spat iced coffee and turned back to his computer.
He’d find out what happened later.
In this town, a naked man, who was not the mayor, would always figure in the evening gossip.