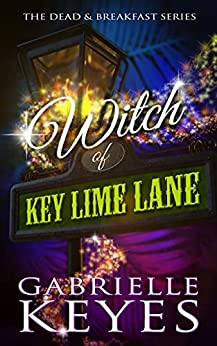 A great quick cosy read. Enjoyable with a touch of the woo and some fun!

An ex who won’t leave her alone. A house on a haunted island. A woman needing a fresh start.

Lily Blanchett, restaurant owner and ex-wife of celebrity chef, Derek Blanchett, has had enough. After publicly setting fire to the last of his things (and making headlines for it), she needs a break from the divorce, and her Aunt Sylvie’s cottage in the Florida Keys seems just the thing. The twins are halfway through college, her mother insists she’ll go crazy if she doesn’t leave NYC for a bit, and nobody seems to need her middle-aged butt around anymore.

So, why not break away for a while? It’ll only be temporary.

But the little Victorian at the end of Key Lime Lane is a strange place where doors open and close as they please, a mermaid fountain watches her, a strange cat appears when Lily least expects it, and her witchy neighbors hold “moon parties” on the beach. Throw in a woke ol’ sea dog and a hot captain with a boat named the “Sea Witch” and Lily is soon surrounded by an eccentric motley crew.

Can big-city, fast-paced Lily get a fresh start on a sleepy little island with a name like Skeleton Key? At forty-five with nowhere else to go, she’s about to find out.

WITCH OF KEY LIME LANE, a story about starting over in midlife, harnessing the magic within, and friendships after divorce, is Book #1 in the Dead & Breakfast series by Gabrielle Keyes