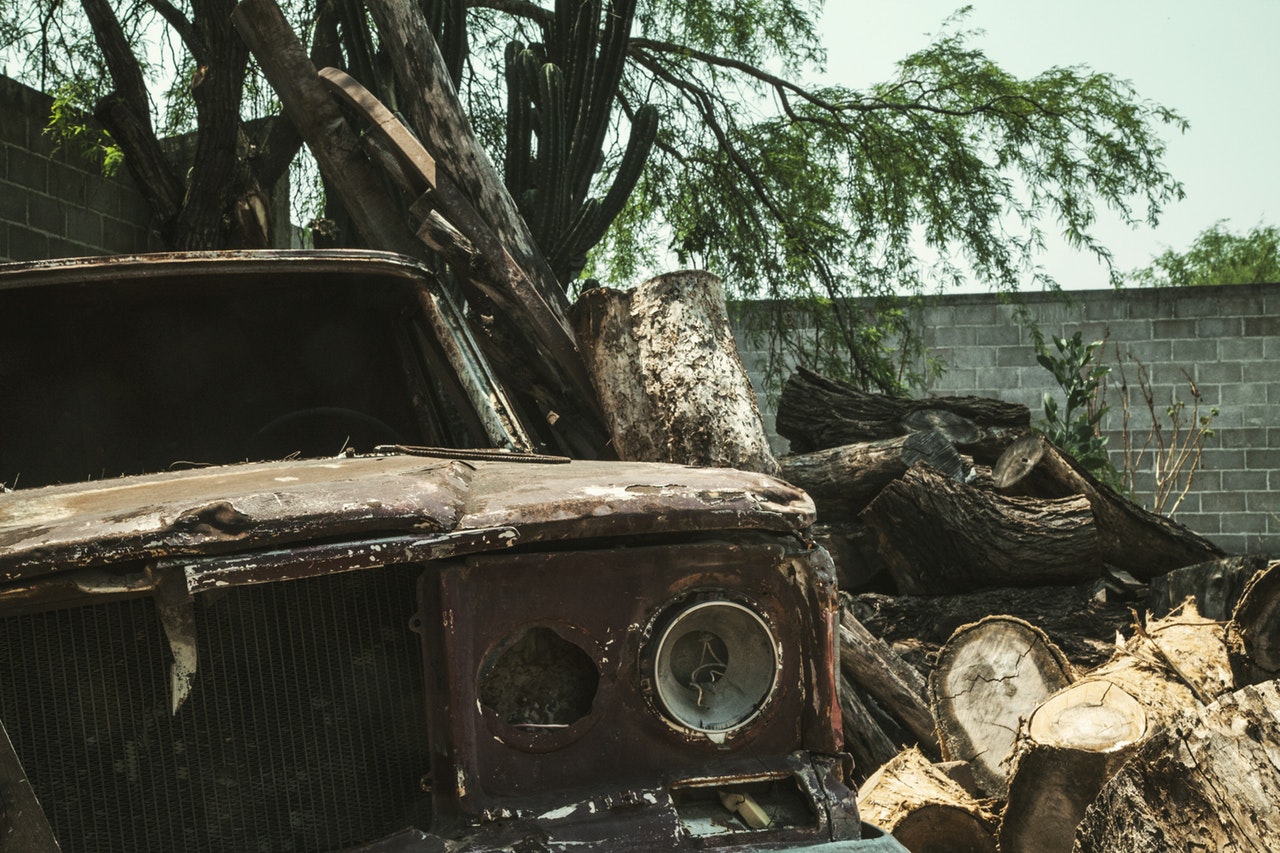 Council Clean-Up Day at Three Corners was a Street Shopper’s delight; and Morrie, who lived on the outer rim of the town looked forward to it more than Christmas every year.
His house, a 1930’s concrete bungalow, was always immaculate; the lawn neatly clipped, the bromeliads flowering, the lavender trim, even the ivy kept to its frame, not daring to divert from its intended topiary. There was a small white painted bird bath in the centre and a bird feeder sat in the branches of a Jacaranda that was always the first to bloom in the valley. A seasonal marker that summer had begun.
Out the back, however, behind the seven-foot-high wrought iron gate was a scavenger’s heaven.
A three-bay garage that never held a car, but had every appliance known to human kind in 40 years housed within its walls. There were bits and pieces of furniture, lounges, antiques, a ton of tins from his ukulele making days, seashells and fence palings. Everything there was ready to be used again, valuable, just waiting for a second chance.
There were wheels of wire and old school seats. If you needed to make a tree house, play house or a billycart, you always went to Morrie’s. Although there were no spare parts for cars, there was a rumour that hidden underneath the grave of bathtubs in the far-left corner a rusty, yellow mini still stood.
Many a new homeowner got their start with a lawnmower from Morrie. He was the go to guy on a weekend when you ran out of whipper snipper coil and the hardware store was closed.
If you needed advice on what glue to use, if something was repairable, how to change a washer, install a septic, how to enamel, or turn a bowl, you went to Morrie.
He would refuse all payment, just happy to tinker, and help; accepting the odd jar of jam in return for handmade lemonade stand for the primary school.
So on Clean Up Day the village of Three Corners paid homage to their handyman, in the only way they could.
On the side of the road was the usual rubbish stacks. Sewing machines, and broken Ikea dreams, fridges and TV’s outmoded and upgraded, and then there were the gifts for Morrie. A gramophone, an old reel to reel, hardware bought in the fervour of a renovation left idle, or well intentioned.
Morrie would set his alarm earlier than usual, and trawl the streets before dawn. He’d greet the slow ghostly procession of costumed night walkers who would relinquish their ownership of the streets. The dog walkers would smile and nod, help lift and sift, and occasionally, coyly, point out something special.
He rented a van especially for the day and would ferry his findings, methodically packing paint tins and piles of tiles, carpet remnants and old drills, and treasure of treasure, wooden cut offs.
From these cut-offs Morrie would slowly compile a wooden picture, using every possible scrap. A valley scene, a news event, a commemoration or celebration, all played out in a carefully compiled cheese board. They were works of art, practical, sought after, given and received with great gratitude.
A small gift, from a big heart, that gave and gave and gave every day, except one.
Council Clean Up Day.
When Three Corners was able to give back.