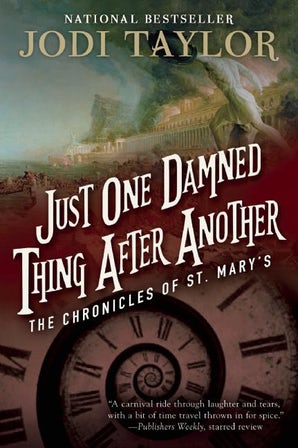 Just One Damned Thing After Another

It’s clever and amusing. A little mind twisty and fun… If you weren’t allowed to change anything – where in time would you go back to?

The first book in the USA Today bestselling British madcap time-travelling series, served with a dash of wit that seems to be everyone’s cup of tea.

Behind the seemingly innocuous facade of St. Mary’s Institute of Historical Research, a different kind of academic work is taking place. Just don’t call it “time travel” these historians investigate major historical events in contemporary time. And they aren’t your harmless eccentrics either; a more accurate description, as they ricochet around history, might be unintentional disaster-magnets.

The first thing you learn on the job at St. Mary’s is that one wrong move and history will fight back sometimes in particularly nasty ways. But, as new recruit Madeleine Maxwell soon discovers, it’s not only history they’re often fighting.

The Chronicles of St. Mary’s tells the chaotic adventures of Max and her compatriots Director Bairstow, Chief Leon Farrell, Mr. Markham, and many more as they travel through time, saving St. Mary’s (too often by the very seat of their pants) and thwarting time-travelling terrorists, all the while leaving plenty of time for tea.

From eleventh-century London to World War I, from the Cretaceous Period to the destruction of the Great Library at Alexandria, one thing is for sure: wherever the historians at St. Mary’s go, chaos is sure to follow in their wake.