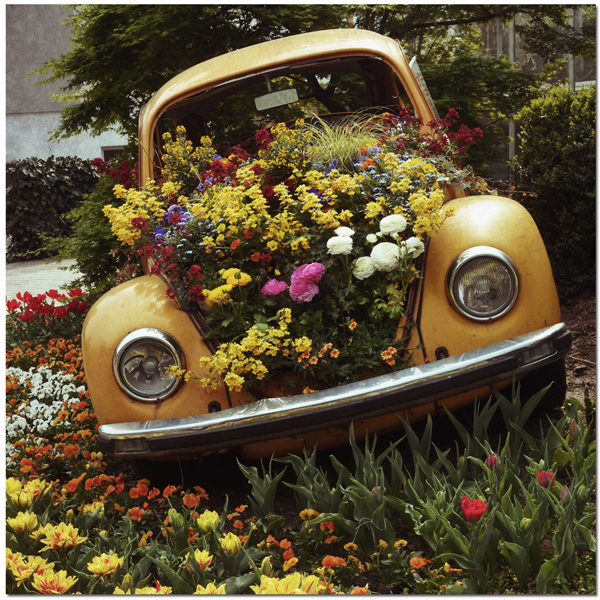 Her first appearance in Three Corners was less than elegant. Remarkable, memorable even, but far from elegant.

In years to come it would be deemed farcical. The old barflies at the pub would quietly reminisce, whispering in hushed tones of the cacophony that the old Volkswagen Bug made as it spluttered and choked up the main street.
The same rusty yellow Bug that came to a halt in the driveway of the old deserted garage. And the very same Volkswagen the primary school made into a sculpture and eco-garden ten years later, though currently the entire car was sprouting pansies.

She’d been driving down from the big city, when the car started to overheat. The brakes were already worn, the radio didn’t work, there was no heating or air-conditioning, and oil soaked pantyhose had been helping the fan belt out for the last 300 kilometres, but it still took her by surprise.

The car rolled into Three Corners waving a thick black flag of exhaust, alternating between growling and whimpering. It backfired once on the outskirts, once outside the grocery store startling a latte from the grip of a hipster, and just once again as it spluttered to a stop out the front of Wheatly’s old petrol station.

With a flick of the wrist and manicured nails, she twisted the keys out of the ignition, elbowed the door open and threw herself out of the driver’s seat across the concrete to land, yes inelegantly, upside down; her flowered skirt billowing over her head, her bottom pressed against the glass of the telephone booth.

In full view of the lunch crowd at the pub.

She wasn’t the main show that day though, for not five minutes later, tearing around the corner a naked man ran, with 4 metres of toilet paper wedged between his cheeks, the end aflame. He yelled as he ran past, elbows pumping, a clumsy stride made hilarious by the determination to get to the river, before the flame flicked up to his end.

That was her introduction to Three Corners, and the first time she met the Mayor.

She happened upon Three Corners in the hope of finding a mechanic. And she stayed, finding a community that could look her in the eye, after seeing everything else.